The base of the museum’s activity is Provisions on The Museum, Conceptions and The development Outlines for the next 5 years, needless to say The Schedule of work for the current academic year. The primary structure of business directions and the organized structure of the museum are shown on the scheme down here. 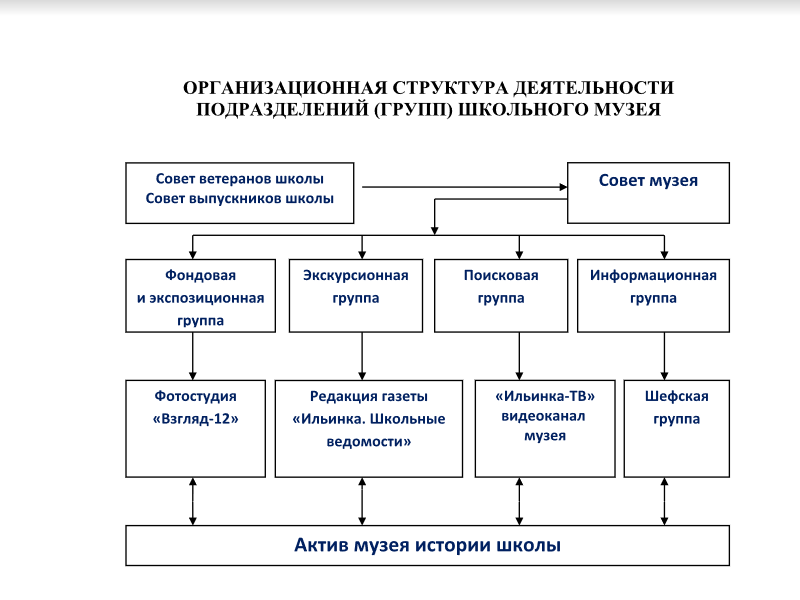 It is one of the basics of our team work. The members of the club are our school students are changing per 2-3 years. Annually we arrange around 150 events about our basic exhibition. The statistic’s shows that average attendance is more than 2 thousands people. Besides, we have different exposures, traditional occasions and Courage Classes that are organized on movable school exhibitions.

During the 2015-2020 years excursions were upgraded by the exposition’s and guide teams according to the Concept and The Program of Museum’s development 2016-2020 years. Onward, the survey excursion’s plan was finally completed and the excursion has got an renewal, including adding new parcellings, such as ‘Samara Ilyinka’, ‘The first male parochial school in Samara’, ‘Homeland’s defender’, ‘The life of our school during the World War II’.

It is exactly the most complicated activity here. The first day has not gone pointless, the team tried hard to find any data, which somehow contains facts about our school. The largest labour was thrown to dig out any documents of the 1960’s, inasmuch as the archive was absolutely lost, so getting unit books of school orders books is quite valuable. The origin base of searching activity is discovering connection the school with others academies of XX century. We have been the novators of such activity. The search-gathering and scientific-practical activities of the museum members Alexander Velikanov, Sergei Yakovlev, Svetlana Lukyanenko, Dmitry Manukhov, Alena Ivanenko and others, made it possible to restore the history of our school, beginning from 1836. In 2016, the common result of this activity was the first edition of the historical and biographical almanac “The third century of studies. History of School 12 ”in 1000 copies.

Our school has confirmed the name of the Hero of the Soviet Union and participant of the Victory Parade on 19 May, 2004. In the modern history of Russia, it was one of the first, more probable  the first time, when an educational institution was given the name of a participant in the Great Patriotic War who was alive at that time.  On the same day the school was named after Safonov F., the school presented a memorial plaque in front of the school.  Subsequently, the historical club took part in setting the memory of the Hero in Samara.  Two more sightseeings dedicated to the Hero were unveiled.  Even after the acknowledgement of Safonov as an honor face of the school, we have not stopped the searching biography project about such an awesome person. The final result was the 500 copies of realization of the historical and biographical collection “Rise to Glory”, which contains our 10 year labour on the basis of archives of the Russian Federation, the Republic of Belarus, the Republic of Kazakhstan, that we are proud to present to wide rage of readers.

One of the memorable sections of the exposition in the museum is the section dedicated to the graduate of the school in 1939, the Hero of the Soviet Union, front-line intelligence officer Yamshchikov Alexander. The Active Museum participated in the preparation and implementation of events for the opening in 2004 of a memorial plaque on the facade of the house where A.V. Yamshchikov was born and lived. In 2005, the assets of the school history museum carried out all the necessary actions to perpetuate the memory of the Hero. In May 2005, a memorial plaque was unveiled in a solemn atmosphere on the facade of the school building. The Hero’s family members donated some of the Hero’s personal belongings to the museum. An asset of the school history museum also carried out work on the collection of materials and documents on the biography of the Hero, the result of which was the publication in 2012 of the historical and biographical collection “Front scout”. At the moment, the collection has been reprinted three times, the total circulation of three editions is 1,500 copies.

In the period 2015-2020. exposition and excursion groups of the Museum of School History according to the Concept and Development Program of the Museum for 2016-2020 new and improved existing excursion and exposition plans were perfected. The sightseeing tour has been completely finished and contained expositions of “Samara Ilyinka”, “The first male parish school”, “Defenders of the Motherland”.

From 2015 to the present, in accordance with an agreement with the Ministry of Culture of the Samara Region, on the basis of the museum of the history of the school, a temporary exposition “A Look Through the Years” was launched, dedicated to the graduate of the school in 1941, Lyubimov A.V., which is still very popular among museum visitors and in the creation of which the activists of the school history museum took an active part.

The video channel “Ilyinka TV” was created in 2008 at the initiative of an asset of the school history museum.  The main areas of work: creation, collection and archiving of audio and video resources of the museum, cooperation with regional television channels in historical and local history media projects.

In 2011, the documentary film “Fyodor Safonov” by the Samara television company “RIO” was released, created within the framework of the “Samara Destiny” project, which was filmed on the basis of the school museum using his photo, film, audio and video archive.  This documentary is dedicated to the biography of F.M.Safonov, Hero of the Soviet Union, whose name the school bears.

In 2012, the museum’s activities to restore the history of the school were presented in the documentary “History of School No. 12”.